The Bishop Forest High School class of 1964 celebrated its 50th class reunion on Saturday, October 11, 2014.  Classmates, spouses, and guests gathered for a fun filled afternoon at The Barn At Piano Bridge northeast of Schulenburg, Texas.  46 members of the 1964 graduation class came out on this fall day to enjoy visiting with each other and sharing memories that were part of our past.  It was also a time for us to catch up on who is where and what everybody is doing now.  We enjoyed a great meal and some excellent fellowship.  It doesn’t seem as though it has been 50 years since we left the halls of BFH.  Our class is strong and we aim to stay connected.  Everyone had an enjoyable time.  If you didn’t make it, we thought about you and wished you could have been there. 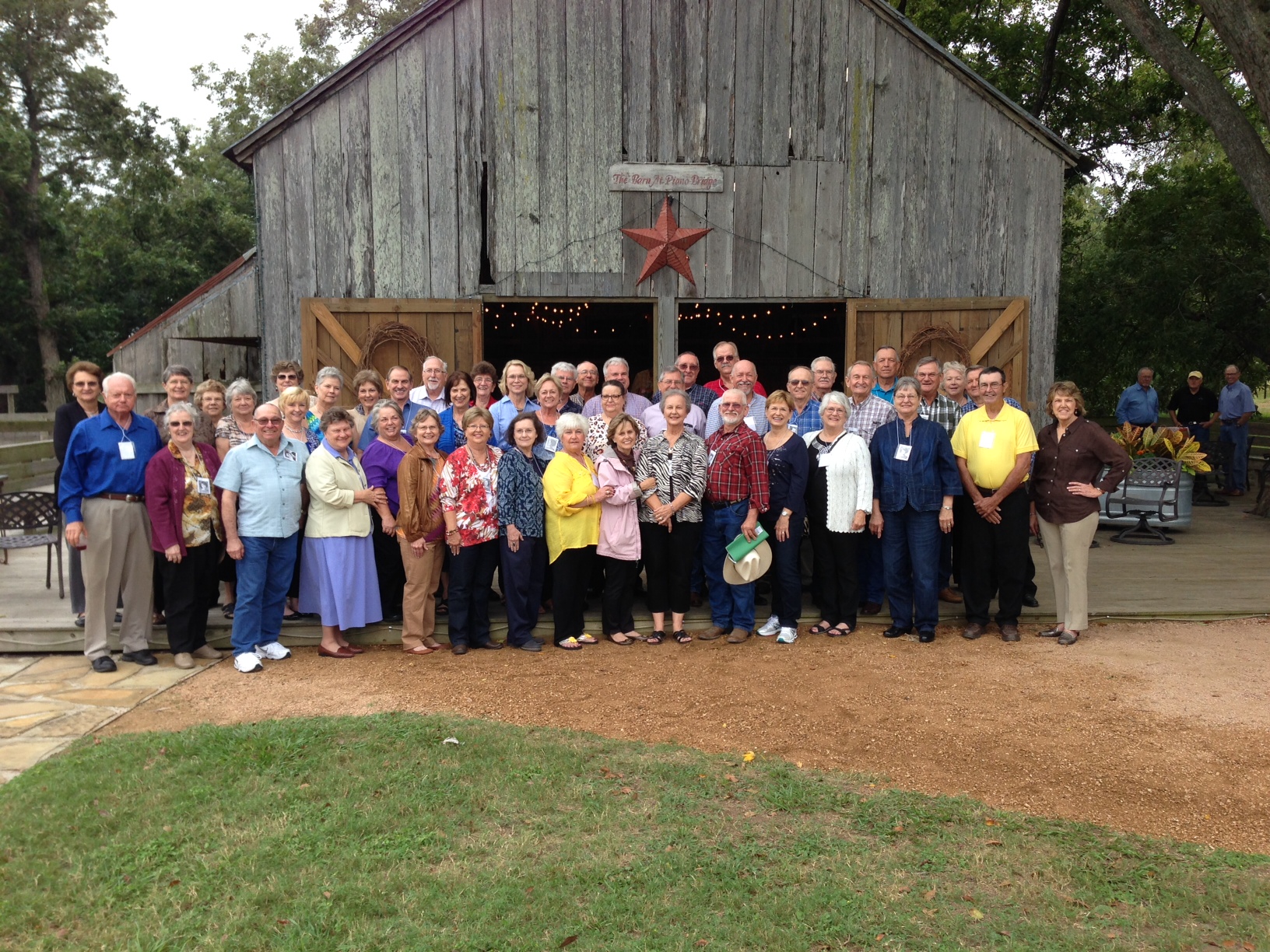 Parade Time: …And Our Class Was Represented!

Hey classmates! We missed you at the 2014 Schulenburg Festival Parade, but we had a good time.  It took a lot of work by Carol Strobel Kana and others to create the float, and a whole bunch of classmates who showed up to ride the float in the parade.  Float riders arrived early to make last minute adjustments. 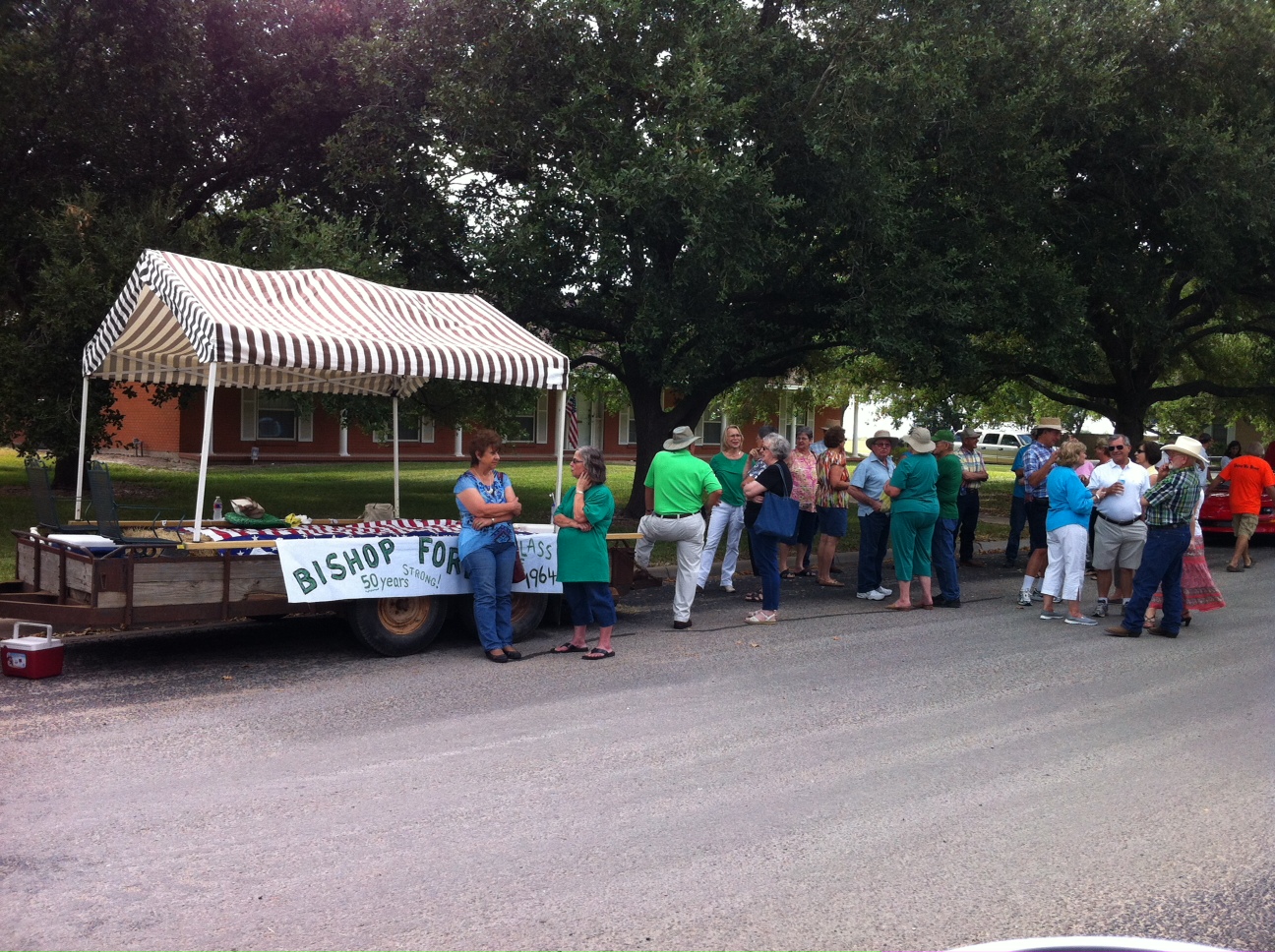 We did have a chance to visit with each other prior to the parade.  It good to see familiar faces we haven’t seen for a long time.  Riding in the parade was a lot of fun.  The kids along the parade route had a blast picking up goodies tossed their way. 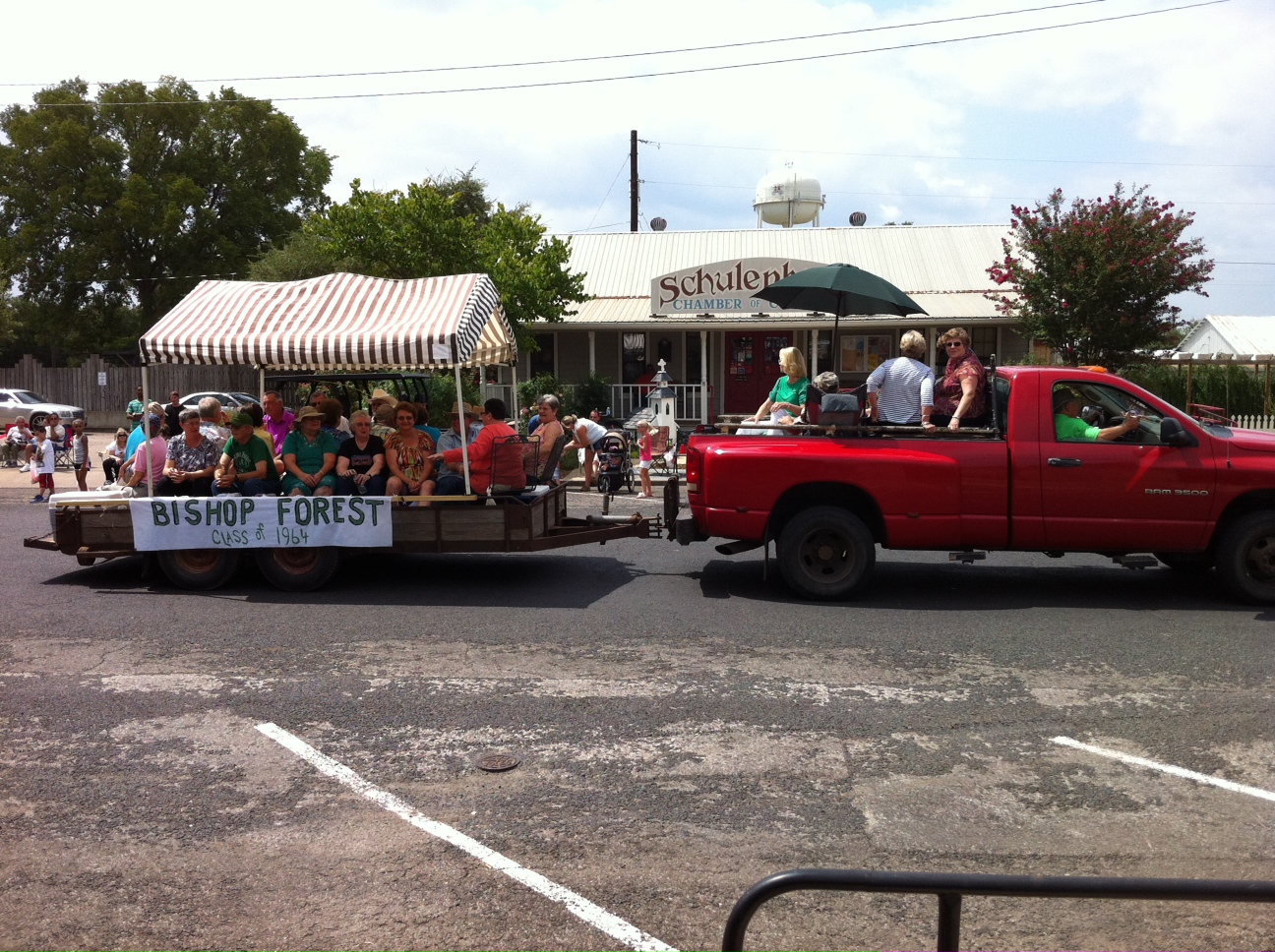 It was sunny and a bit warm, but that didn’t dampen our BFHS spirits.  We were proud to begin celebrating our 50th reunion year.  Everyone had a good time.  Sure do wish you too could have been there to help make it a special day.

Classmates of 1964, it’s time to have some fun.  We are going to begin celebrating our 50th year reunion a little early.  Make plans to  hop on the BFH Class of 1964 parade trailer/float at the Schulenburg Festival Parade on Sunday, August 3rd at 11:00AM.   For more details, contact Carol Strobel-Kana.  Carol says she doesn’t want to party alone.  Come out and be part of the parade! 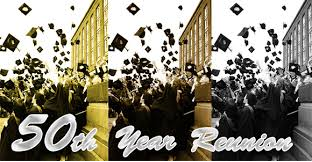 Hey classmates of 1964!  Reserve the date of Saturday, October 11, 2014 on your calendar.  We will be celebrating our 50th year of graduation from the halls of BFH.  More details to come.

Memorials in lieu of flowers may be made to the Congregation of Divine Providence in San Antonio, or to St. Mary’s Catholic Church in High Hill, Texas.

Classmates are asked to remember Marie and her family in prayer.

The Class of 1964 Loses a Classmate

Frank Edward Kocurek, 67, of Cuero passed away on Friday, January 10, 2014 in Victoria, Texas. He was born on July 11, 1946 in Hallettsville to Frank Emil Kocurek and Edith Watzlavick Kocurek.  He married his beloved wife, Laura Aschenbeck on November 18, 1972 in Cuero. He spent his life as a rancher and loved the country life. Being a cowboy, raising his horses, and cattle, making and baling hay, and all of the other aspects of being a rancher, were all of the things that he loved to do every day.
He is survived by his wife of 41 years, Laura Kocurek; son, Brad Kocurek (Emily) of Cuero; mother, Edith Kocurek of Schulenburg, and brother, Donald Kocurek, MD of Schulenburg, and also his faithful companion, his blue heeler Blu.
He is preceded in death by his father, Frank Emil Kocurek.
Visitation was held on Sunday, January 12, 2014 from 6:00 p.m. to 8:00 p.m. with a rosary at 7:00 p.m. at Freund Funeral Home. Services were held on Monday, January 13, 2014 at 10:00 a.m. at St. Michael’s Catholic Church in Cuero with Father David Berger officiating. Interment followed at 1:30 p.m. at Sts. Cyril & Methodius  Catholic Cemetery in Dubina, Texas.
Pallbearers included Hayne Hermes, Matthew Hrncir, Jared Kocurek, Ryan Sprinkle, Larry Rosenbach, and Ross Jones.
BFH alumni are asked to remember Frank and his family in their prayers.